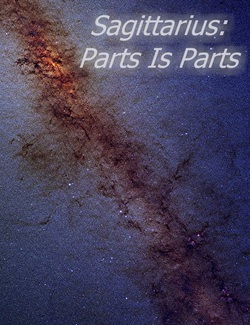 Melakt raised his eyebrows. "I hear it went well."

Tavakh was less than sanguine about the process. "Well for the Earth humans, yes. As for me, I think engineering synchronicities is an oxymoron."

"A blue jewel at the end of the tunnel?"

Tavakh backpedalled visibly. "I would term it a blue planet, rather than a jewel."

Melakt looked puzzled. "How so?"

"There were no true blue jewels available, truth be told."

Melakt cocked only one eyebrow this time. "And so?"

"Parts of planets which collided, basically a ring we snagged from a small solar system in Rigel."

"You went to Rigel?"

"It's big, very big. A lot of odds'n ends you can't find anywhere else."

Melakt sought the brandy bottle. "How bad is it, really?"

"Its lifespan is ... unpredictable."

Melakt poured himself a stiff brandy and swallowed it at one go. He then handed the bottle to Tavakh who did likewise.

"Carpa? It's like a rollercoaster solar fragment hurtling outside any extra-galactic framework at very high speed, so we arranged to put a big pile of rocks in orbit around it and somehow we stuck them together?"

"We coalesced, them. Good, because of course SuperGlue just doesn't cut it out here in Spirit World." Melakt shook his head.

"We have a nice moon. We scarfed Titan from the Sol system."

"We stole one of their own moons?" Melakt looked astonished. "That's a bit low, isn't it?"

"I thought perhaps it would give them some sense of connection to their past."

Melakt tried without success to smack his forehead. "Ah, silly me, of course! Because Earthlings have always been so up-to-speed, cutting-edge with their knowledge of the Sol system."

Tavakh helped himself to more brandy. "It was frankly the best I could do. It's not exactly playing by the rules."

"No, it isn't, and for that I'm grateful, Tavakh. With 14 Earth years before the next Council session, do you think this ... Carpa ... will hold together that long?"

"I'm uncertain of that."

"The speed of the system itself. It's travelling at roughly 25% of the speed of light."

"Is it headed anywhere in particular?"

"It's headed directly into the core of the Milky Way, as Earthlings so quaintly call it."

"Yes."  Tavakh cleared his throat, a sound Melakt had heard before. "It appears as a fixed star."

"So it's literally headed right at us?"

"That would be my guess."

"Possible motivation for the council to get off its duff and settle the matter?" Tavakh smiled helpfully.

"The planet on which we stand, where we have our meetings, you do realize this is it?"

"It is the largest planet in Universe to date. We come here because - to borrow a term from you - it's gravity is so strong that it can coalesce a Spirit body into a corporeal one. That is how in fact Creative Energy came to be in the physical sense, and what started the process of enlightening Universe itself." He turned to Tavakh. "It is how Universe became self-aware."

"Yes, as you say, 'Oh.' And you have just - again to borrow an expression or two of yours - just pointed 'a fairly nimble'  and 'unstable' missile at it."

"Indeed. And mine, for trying to arrange a soft-landing for humans." Melakt swallowed more brandy, his anger dissolved in it for the moment. "Nonetheless, if you can get us to the next Assembly of the Council with this pile of rubble attached to a flamethrower, then you will have accomplished what I asked, friend Tavakh." He finally had the panicky feeling under control. "Our friends? They are aware of everything?"

"Yes, everything but the name, but I've made arrangements about that."

"The name was a puzzle to me actually. I guess we're getting a bit low, are we?"

Tavakh got it over with. "I threw some scrabble tiles on the floor of my room until I got a string of Earth phonemes I could pronounce."

"I could have stopped at 'Carp' which is an English word for a type of fish ... but "

"I know, so I just added the first vowel in the English alphabet." Tavakh smiled in relief at the end of his own story.

Melakt finally smiled. "You are a crafty fellow, Tavakh. I am reminded again why I avoid games of chance with you."

Tavakh smiled gratefully as more brandy was offered. "In life as in games of chance, as you so often say, it is sometimes necessary to tilt the table."

Melakt smiled at him as he raised his glass. "And that we have, my dear friend, that we have."