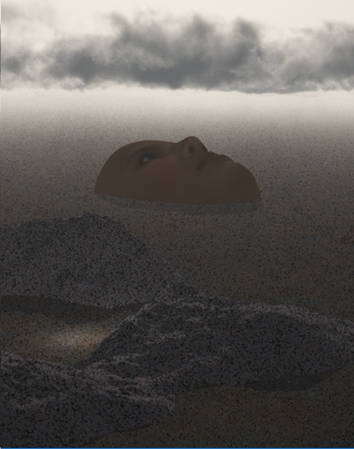 Sands had finished documenting the body of the dead young man. Talman never did anything but bitch while Sands went on with his work.

Sands was at the point where he was considering scrabbling around in the brush to find a weapon like the one used to end the boy's life in mid-stream. At this point in Sands' morning, he would have settled for a sharp twig to use on Talman.

Sands heard Aggie & Rails pull up and knew that Talman's bipolar disorder would ratchet down another two notches on the 'whatever' scale they used to measure such things. Sands also knew that Talman resented Sands' genuine affection for the two women.

He settled for gushing over their arrival, and hugging them both.

Aggie & Rails found that rather disturbing considering these were crime scenes.

Rails ended the frivolities by asking the obvious. "Where's the other one?", thus cueing Talman for a long monotribe about no one ever telling him anything.

Sands smiled with some satisfaction as he pointed to the greenhouse and told the women Raitt & Colavito were inside.

As Aggie & Rails wheeled their gurney down the slope, Sands tidied up just slowly enough to drive Talman even further into the depths, and made plans to bugger his partner with a tad more force than usual as time allowed.

The slope allowed Aggie to free-ride the gurney just by standing on the lower rear rail. She slowed when she saw Rails make the "bad smell" gesture, but it was still only one second later that Aggie's eyes were watering.

Rails called into the greenhouse as they set up the gurney. "Jenn? Stephen? You guys ready for us?"

She was surprised to see Colavito & Raitt poke their faces out the doorway. "What's up? Are we in the wrong place?"

Colavito shook her head. "No, but how did you know about the second scene?"

Rails & Aggie looked at them in puzzlement. Rails shrugged and said "Well, for starters, it's all over the news."